I’m back from the KI Infection Retreat, the annual meeting organized by the Infection Network at Karolinska Institute. The network is composed by researchers interested to anything named after “microbes”.

This year venue was Utö, a big island at the south of Stockholm archipelago.

The opening discussion was about policy at KI, issue on which many KI fellows are sensitive to: a recent wave of uncertainty has hit researchers, since important rearrangements of KI administrative and physical structures have brought to spending reviews.

Mats opens with the a recent cover from The Economist titled “microbes maketh man“, a sci-fi version of the Vitruvian Man. He used this example to warm up the audience: “look! They are talking about us!”.

It’s a fact that people (or at least media) has re-gained interest in microbes, after what it seemed a never ending departure from infection disease interest to what turned to be the public obsession of the XXI century: Cancer. Did we found our Higg’s Boson story? 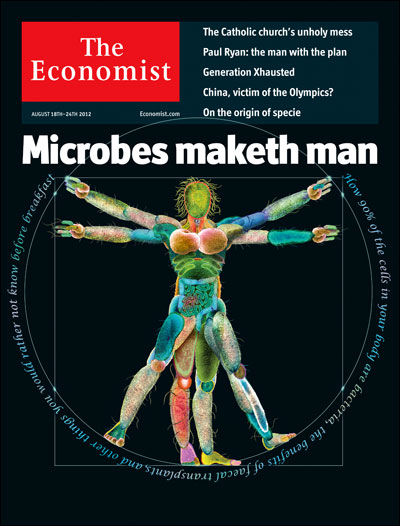 Mats’ mission of the talk was to highlight all the great discovery that people at KI did in microbiology. He remedied to us that the first bug-free animal ever made was at Karolinska Institute, thanks to the pioneering efforts of Bengt E. Gustafsson that made the first germfree rodent.

From a list of  a dozen acknowledgments, I spotted the EBV biology research from Eva and Georg Klein, the capside and fimbria biology on Escherichia and Streptococcus, from Anna Norrby-Teglund and Birgitta Henriques-Normark, the genome sequence of the Trypanosoma cruzi from Björn Andersson, and Sven Pettersonn role within the TORNADO fp7 consortium and his work on the influence that microbes have on brain development.

A special slide was dedicated to Hans Rosling, who “makes people understand the link between poverty, life expectancy and infection biology”.

After Mats, Staffan Normark brings back the audience to the uncomfortable feeling that things are not that bright: “For how long will this hyper on microbiology last?”. Staffan says that we need to move from the tons of epidemiological evidence that indicates that microbes are important, to the actual reason: WHY are they important? (Totally agree on the lack of evidence on this side – do you wanna publish high these days? Work on this!).

“What are the priority for globe? Academia is a low priority, high priority are global sustainability and health: convince the politicians that what you are doing is relevant”. Staffan pulls up the audience: if you don’t make people understand what it’s all about and why YOUR research matters, forget to stay in the game. He closes saying to all of us to be proud of being a microbiologist (go geek, go!), a topic that (alone) may not lead to any fund application, but it’s still so essential in so many divers aspect of health research.

Martin Ingvar closes, playing the role of the bureaucrat. Though I could still feel the spirit of the researcher beating inside him, that have been somehow conquered by his political-self. “Society has high expectations about the things we do”. “It’s fine to do besic research, but you have to do it in a way that is the leading way in the world”.

The message I got from these people talks is that either you are doing translational research, or you have a patent, or you bring money to KI in some other way, or you do basic research that is very very good. If you don’t fell in these categories, don’t even try to hide behind your desk and keep pipetting your four tubes. They will cop you!

Is this really close to the true? Are things really so restrictive at KI as they wanna make it sound? And you, are within these criteria?